Growing up, we all loved watching Disney animated movie “Cruella” which undoubtedly made our holidays so exciting and fun. Luckily, the live-action remakes Disney has done for the past decades have been amazing and personally loved by us too. Through the power of unparalleled storytelling and creative minds, these movies have made our childhood so memorable and enjoyable and granted our lifelong wish to live in a fictional world.

Set to the best hits of the 70’s, the movie industry was bestowed with the direction of Craig Gillespie and a screenplay by Dana Fox and Tony McNamara in the form of an American crime comedy film, Cruella which is based on the famous character of Cruella de Vil and is adapted from Dodie Smith’s 1956 novel, The Hundred and One Dalmatians. It is the third live-action adaptation of the 101 Dalmatians franchise, serving as both a prequel and reboot.

The story revolves around Estella, a young orphan girl with a genetic quirk of white and black hair who wants to make her name in the fashion world. She is presided over by two dodgy scalawags, Jasper and Horace, who took her in when she was homeless and schooled her mischievous ways of thievery. However, when Estella befriends the fashion legend, Baroness von Hellman, she embraces her wicked side to become the raucous revenge-bent and reinvent herself as the punk-genius brand-named Cruella.

Recipient of several accolades and considered as one of the most 100 influential people around the world by Times Magazine, the iconic Emma Stone stars in the movie as Cruella de Vil and does a fantastic job. She owned the character by not just doing mimicry of Glenn Close’s performance from 1996, but created a vicious and fun-loving, though rebellious and terrifying incarnation which is really fun to watch. Being said that, Emma Thompson’s performance as the unabashedly narcissistic Baroness von Hellman is phenomenal too. The supporting roles however are portrayed by Joel Fry, Paul Walter, Emily Beecham, Kirby Howell, and Mark Strong.

Since we are focusing on the character of Cruella, how about we unfold more about her personality and life in detail to make you more familiar with the most fashionable villain of Disney.

Unlike the other villainesses of Disney, such as the Evil Queen, the Queen of Hearts, and Maleficent, Cruella was not a schemer and she didn’t possess any powers. Instead, she acted purely on her impulse and was always defeated due to her reckless behavior, stubborn relentlessness, and the incompetence of her henchman.

Her visual traits were inherited from the original novel which described her as, half black-haired and half white-haired wearing a long black dress and an enormous mink coat that swings like a cloak.

Adoring high fashion and art, Cruella was short-tempered and used to look down on others with no sympathy. She was always throwing tantrums when things didn’t go her way and often seeks animals to help her with making coats as it gets her more money and makes her popular.

Now let’s talk about the costumes adopted throughout the films which were totally iconic and transcended the actors who wore them. The brains behind the gothic and tremendous get-up of the most anticipated and notoriously fashionable villain, Cruella de Vil is Jenny Beaven who has won an Academy Award for The Best Costume Designer in 1986 for A Room With A View. She effortlessly channeled all the wicked and rebellious energy of Cruella into her sumptuous outlook which was a true success and gained huge recognition in the fashion world. To conclude it rightfully, Beavan and Stone together created magic.

Perfect for Halloween or cosplay, if you want to dress like your favorite Disney antagonist, you can easily recreate some of her most iconic looks with minimal efforts by getting hands-on all the outfits she has worn throughout which will guarantee to be top-graded and high in quality and on top of that, accessible at a reasonable and pocket-friendly price exclusively at Mjackets.

To make your quest more enjoyable and less time-consuming, we have sorted out some of the most diverse and dynamic Cruella Outfits which will make you the most eyed person wherever you go donning them and give you a distinctive look for sure.

Minimal in a style that makes it perfect as casual wear, Emma Stone Cruella 2021 Jacket is just what you need to make a sturdy statement. It allows you to transition your everyday simple style into something more cool and funky and who wouldn’t love that?

Thereupon, challenge yourself with this stylish article of clothing which can easily be styled with any pair of jeans.

Once Upon a Time Cruella Deville Fur Jacket

Redefine your style with the ultimately superb and elegant Once Upon a Time Cruella Deville Fur Jacket which is crafted from premium quality fur fabric and ensures a graceful appearance to the wearer. Tailored to perfection with some notable features, this coat is worn by Victoria Smurfit who reprises the role of Cruella de Vil with excellence, winning the hearts of many in the meantime. 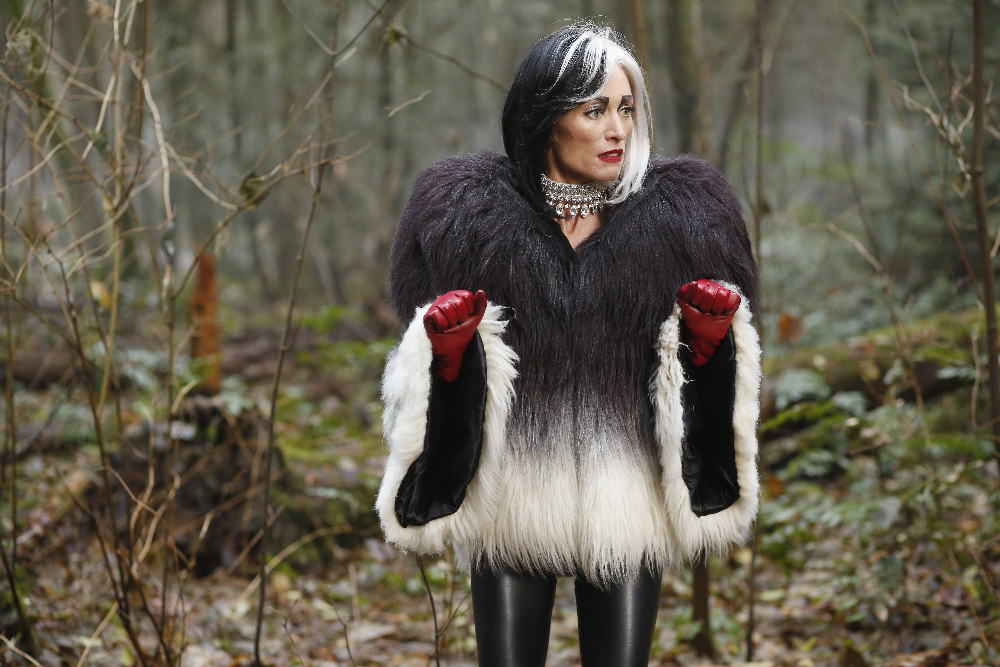 An exotic and tremendous style statement is all you need to make with Cruella de Vil Emma Stone Jacket to prove yourself as a fashion-forward and up-to-date style lover. inspired by the iconic outlooks of Emma Stone in Cruella, this jacket is formulated from top quality real leather material and exhibits some highlighted features such as, erect style collar, front open with zippered closure, and full sleeves which are secure with open hem cuffs.

Hop on the trend and invest in this stylish Emma Stone Cruella Deville Leather Jacket which is all set to give you a sharp and edgy look. authentic in details which makes it even more appealing, the versatile look of this attire is enhanced by the catchy features and exquisite pop of classic black color which further adds to the uniqueness and lavish appeal.

The ground-breaking Cruella Deville Coat is pleasing not only to the eye but your body as well due to the soft satin fabric lined underneath which provides the wearer with magnanimous warmth and comfort. Featuring a classic white-colored exterior crafted from real faux fur material for a high-end look, the coat ranges below your knee and is eminently stitched for perfection and endless durability. 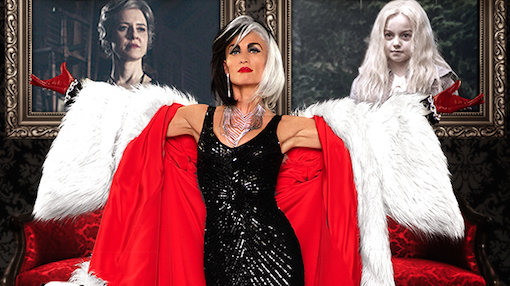 Everything Amazing To Know About Squid Games Outfits